Even Bruce Braley Visited All 99 Counties, Which Greenfield Has Failed To Do

Greenfield’s refusal to visit over half of Iowa’s counties is remarkable, given that even some of the worst candidates to run statewide know how important it is to visit every county.

“Bruce Braley made a lot of mistakes, but even he visited all 99 counties, something Theresa Greenfield refuses to do and will be just as fatal as Braley mocking farmers,” said Joni Ernst spokesperson Melissa Deatsch.  “Given that Greenfield lives in one of Iowa’s wealthiest zip codes and her liberal positions align with coastal liberals, it’s no wonder she’d rather hide out than answer for how her policies would hurt rural Iowans.” 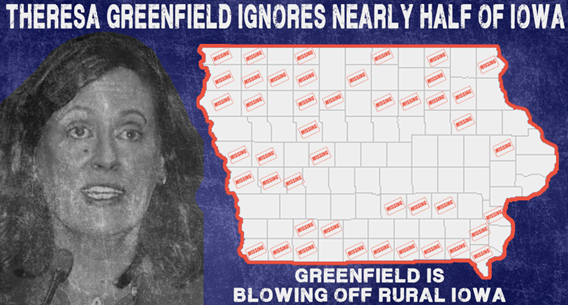 Braley Was First 2014 Senate Candidate to Visit All 99 Iowa Counties.  “With an event in Bloomfield, Iowa, this afternoon, Rep. Bruce Braley announced today that he has visited all 99 Iowa counties since announcing his candidacy last February for the US Senate seat held by Tom Harkin. (River City Reader, 02/20/14)