NEW: Video Exposes Greenfield for Ignoring Half of Iowa

Joni meets with Iowans in every county, every year

Team Joni is launching a new video titled ‘Every Voice Matters’ exposing out-of-touch Theresa Greenfield (D-Country Club Knolls) for ignoring rural Iowa and refusing to go to nearly half of the counties in the state. This is a glaring contrast to combat veteran Joni Ernst (R-Red Oak) who meets with Iowans in every county, every single year. 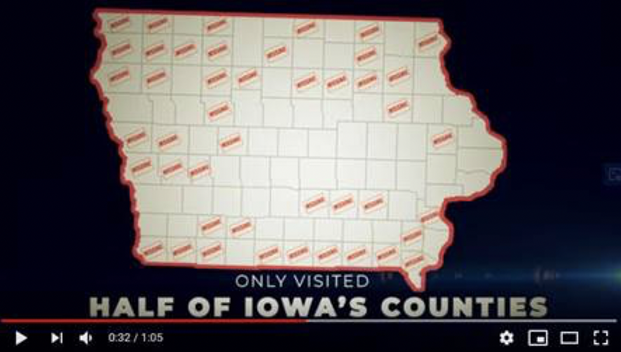 “Theresa Greenfield’s plan to ignore rural counties in Iowa makes it clear she doesn’t care about rural Iowans. It’s no wonder Theresa Greenfield, who lives in one of the wealthiest zip codes in the state, continues to avoid questions and mislead Iowans about the extreme liberal policies she supports that would hurt our farmers and small businesses,” said Joni Ernst spokesperson Melissa Deatsch.

After 15 months of campaigning, Greenfield still hasn’t been to nearly half of the state, and has especially neglected the rural areas.

Greenfield’s plan to ignore nearly half the counties in Iowa is a stark contrast from Iowa candidates of either party who have prioritized completing the 99 county tour, such as Senator Chuck Grassley and Governor Kim Reynolds. Even former Democratic senate candidate Bruce Braley visited every county in Iowa during his failed run.